Shrub encroachment into arid grasslands has been associated with reduced grass abundance, increased soil erosion, and local declines in biodiversity. Livestock over‐ grazing and the associated reduction of fine fuels has been a primary driver of shrub encroachment in the southwestern United States, but shrublands continue to persist despite livestock removal and grassland restoration efforts. We hypothesized that an herbivory feedback from native mammals may contribute to continued suppression of grasses after the removal of livestock. Our herbivore exclusion experiment in southeastern Arizona included five treatment levels and allowed access to native mammals based on their relative body size, separating the effects of rodents, lago‐morphs, and mule deer. We included two control treatments and replicated each treatment 10 times (n = 50). We introduced uniform divisions of lawn sod (Cynodon dactylon) into each exclosure for 24‐hr periods prior to (n = 2) and following (n = 2) the monsoon rains and used motion‐activated cameras to document herbivore visita‐ tions. In the pre‐monsoon trials, treatments that allowed lagomorph access had less sod biomass relative to other treatments (p < 0.001), averaging 44% (SD 36%) and 29% (SD 45%) remaining biomass after the 24‐hr trial periods. Following the onset of monsoons, differences in remaining biomass among treatments disappeared. Desert cottontails (Sylvilagus audubonii) were detected more frequently than any of the other 11 herbivore species present at the site, accounting for 83% of detections dur‐ ing the pre‐monsoon trials. Significantly more (p < 0.001) desert cottontails were de‐ tected during the pre‐monsoon trials (2,077) compared to the post‐monsoon trials (174), which coincided with biomass removal from lagomorph accessible treatments. We conclude that desert cottontails are significant consumers of herbaceous vegeta‐ tion in shrub‐encroached arid grasslands and they, along with other native herbi‐ vores, may act as a biotic feedback contributing to the competitive advantage and persistence of shrubs. 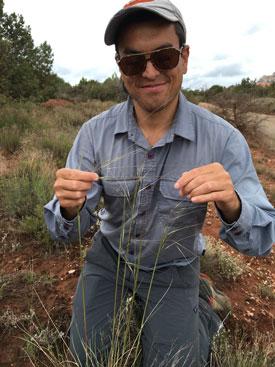 Ecology and Evolution
Date of publication:
2018