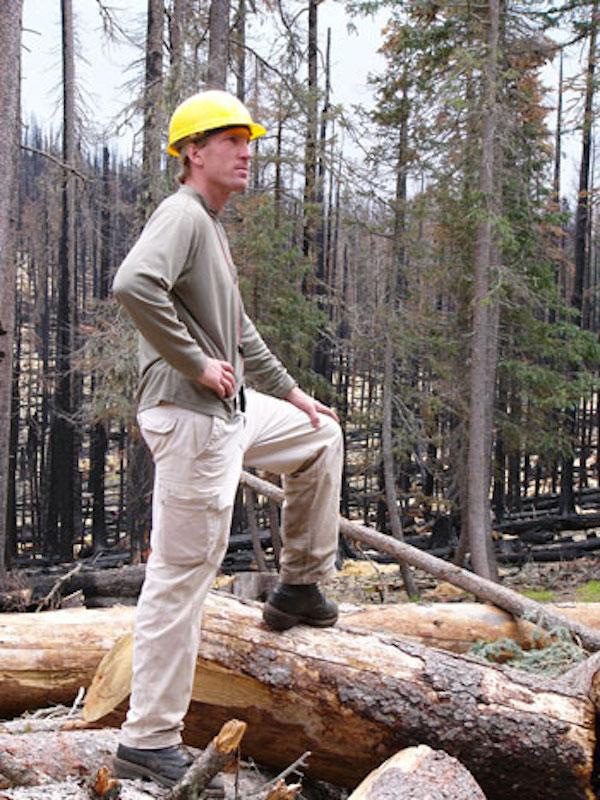 Difficulties in conservation and management of forest ecosystems arise from dynamics of forests and challenges in understanding disturbance. Disturbances, especially fire and insect outbreaks, have increased in occurrence and severity due to climate change and forest management.
The Pinaleño Mountains of southeastern Arizona, USA have suffered catastrophic fire and large scale insect outbreaks in the last decade and are the only home of the federally endangered Mt. Graham red squirrel (MGRS:  Tamiasciurus hudsonicus grahamensis), therefore an understanding the impacts of forest disturbances on population dynamics is critical for conservation of this fragile species. We sought to develop and a spatially explicit population model to predict long-term population dynamics of MGRS and to combine this model with life-history data and high-resolution satellite imagery with the goal of examining effects of future disturbances on the population.

We tested model predictions using available range-wide red squirrel life-history data from the literature and fieldwork specific to the MGRS. An input data set using general mean life history values overpredicted MGRS abundance. However, we found significant correlation with known squirrel abundance using a general data set with curtailed fecundity and survival. A model with MGRS-specific data provided the best fit to observed population size. We investigated potential impacts of two major threats to the MGRS: competition from introduced Abert’s squirrels (Sciurus aberti) and increased levels of predation. Predation and particularly competition could have significant effects on the future population of the MGRS. Careful attention must be used to model the viability of fringe populations as peripheral populations can have a different life history than populations found in the range core.

We also modeled potential Mt. Graham red squirrel habitat by identifying characteristics of cover surrounding their centrally defended larderhoards to assess effects of forest disturbance on habitat. We classified high spatial resolution satellite imagery into ground cover classes and used logistic regression to determine areas used by squirrels. We also used midden locations in conjunction with slope, elevation, and aspect variables to create a predictive habitat map for Mt. Graham red squirrels. Squirrels selected areas of denser forest with higher seedfall for midden sites. Among active middens, those in the densest and least damaged forests were occupied in more seasons than those in more fragmented and damaged areas. The future conservation of red squirrels and the return of healthy old-growth forests to the Pinaleño Mountains will rely on management in mixed conifer zones of the mountain and active restoration of highly damaged upper elevation spruce-fir forests to return them to squirrel habitat. This model allows us to evaluate the spectrum of fine- to coarse-scale disturbance effects (individual tree mortality to the area wide boundaries of a disturbance) with high-resolution satellite imagery.

Lastly, we combined our spatially explicit population model with the spatial models of habitat heterogeneity. We parameterized the model with estimates of extent, frequency, and severity of insect outbreaks and fire and used the number of Mt. Graham red squirrel populations dropping below critical population thresholds to characterize the effects of these disturbances. We determined future disturbances, even at low levels, are likely to have a detrimental effect on Mt. Graham red squirrel population size. This model framework can be used to predict effects of future disturbance on habitat quality and population persistence for species in general.

Where is David Now?